16 Days of Activism against Gender-Based Violence
2021 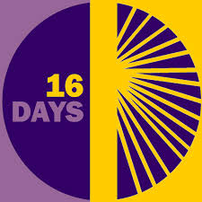 Throughout the campaign, Mothers’ Union joins with many others, globally, to raise awareness of, and call for an end to, gender-based violence in all forms and in all societies.

Mothers’ Union has produced a set of resources specifically for its members and friends, which you are welcome to use and to encourage others to use. We hope this helps to support our members and friends to engage with this important campaign.

The information provided can be used to share knowledge and increase awareness of this important issue. It can be distributed (for example, during meetings) or reproduced (for example, in church leaflets or as content for your own resources). Additional resources will be added as the 16 days draw closer – so keep checking back on the Mothers’ Union website.

The 16 Days of Activism against Gender Based Violence Campaign is an extension of the day-to-day grassroots work of Mothers’ Union. We work alongside communities to help end gender-based violence and to support those affected by it, every day of the year.

Mary Sumner House have produced an International  PRAYER DIARY "Prayers and reflections for 16 Days of Activism against Gender-based Violence and abuse." To download this Prayer Diary, click on the Button below